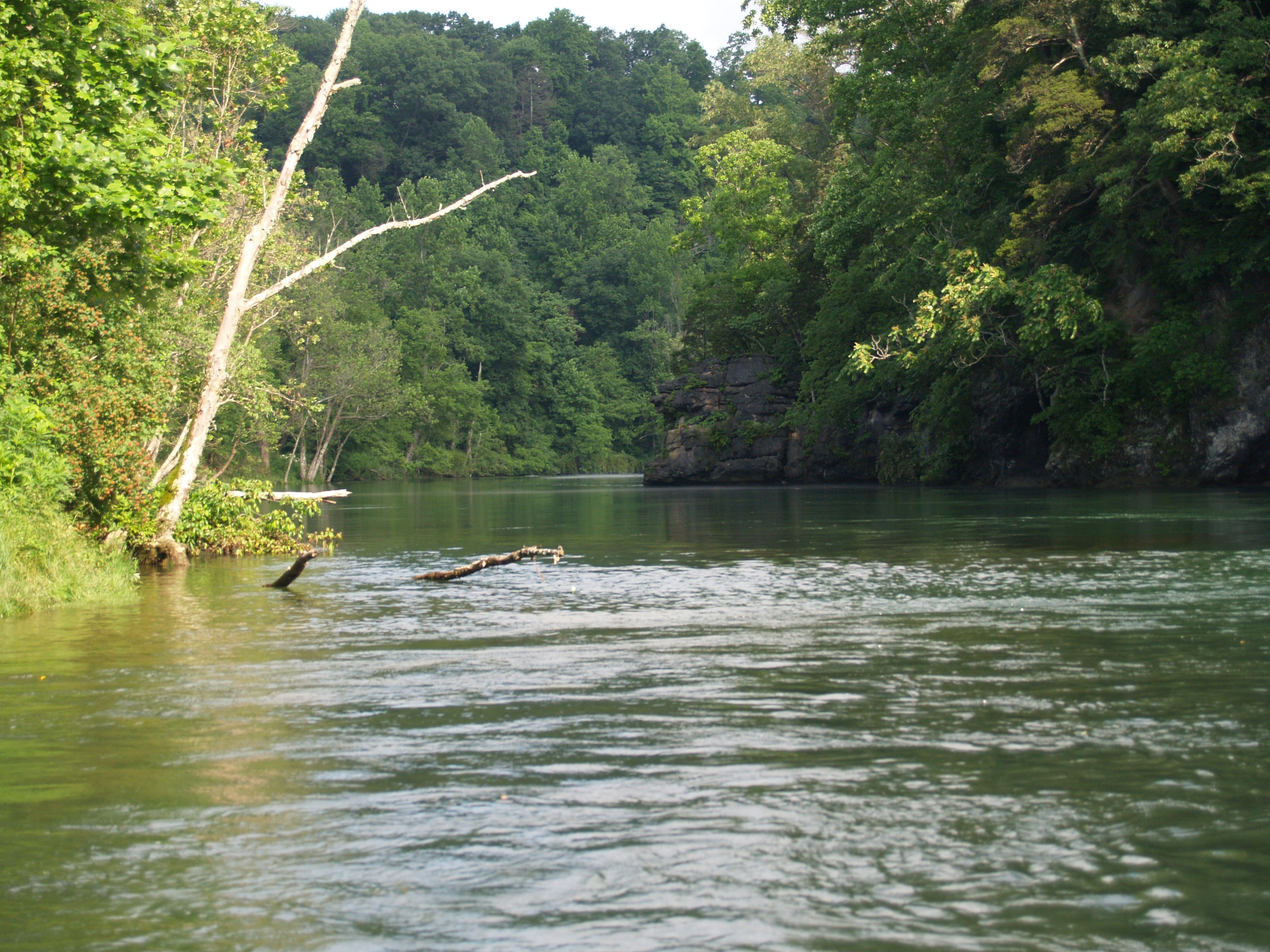 The Watauga River tailwater flows from Wilbur Reservoir near Siam TN to Boone Lake near Johnson City.  The majority of the water that feeds the Watauga is held in Watauga Lake, but just below Watauga Dam is a second smaller lake called Wilbur.  Make sure when you check TVA river flows you look at Wilbur Reservoir not Watauga.  The river is approximately 17 miles long from Wilbur Dam to Boone Lake and flows through many different sections and townships.   Travel time from Asheville, NC is approximately 1 hour

The Upper Section – runs from the Dam to Hunter Bridge.  The first half of the river is mostly on private land and is very gorge like.  Huge limestone cliffs dominate the sides of the river until the river gets down to Siam.  From Siam to Hunter the river is mostly large shallow riffles with deep slow pools between them.  The bug life up here is mostly midges, small mayflies, and scuds.  Midges hatch year round and BWOs hatch most commonly from Oct-April.  This section is the most likely to stay clear if we see big rains.  The upper has the highest fish numbers on the whole river.

The Middle Section – runs from Hunter Bridge to the TWRA access at Blevins Rd. The first half of this stretch has many shallow riffles and smaller runs.  Once you pass through Elizabethton the river narrows and gets deeper.  There are many big ledges separating slow deep pools and even one small waterfall that must be navigated by boat operators.  Bugs here are larger than the upper, but many midges are still found along with bwos, sulphurs, caddis, and craneflies.  As you move through the middle fish numbers decrease slightly, but average size goes up.

The Trophy Section – runs from Blevins rd to Persinger Bridge in the town of Watauga, TN.  This is the stretch of river that receives the most angling pressure, but it has the largest concentration of big fish.  Special regulations forbid the use of bait or scented artificial and anglers can only keep two fish per day of at least  14” in length.  This allows many more fish to grow to larger sizes.  Insects here are midges, bwos, sulphurs, many different caddis, craneflies, and assorted other mayflies.  There is no public wade access except at the beginning and end of this stretch.

The Lower Section – runs from Persinger Bridge into Boone Lake.  The most popular take out is at the River Stone Campground and your shuttle driver can arrange for you to use that access.  It does require an extra fee.  This stretch has some of the coolest riffles on the river and several long flats that are great for picking off feeding fish on dries.  Bugs here are the same as the trophy section.

The Watauga River flow changes dramatically due to releases from Wilbur Dam.  From Memorial Day to Labor Day the TVA has a recreational flow schedule they follow.   Basically Monday-Saturday there will be no water until noon or so and then they will generate power and release water for rafters.   The TVA usually does not release water on Sundays during the summer.  The rest of the year the TVA can generate power whenever they want.  Check Wilbur Dam for projected releases and always be ready to get out quickly if an unplanned release occurs.  The river is not really wadeable during a water release and you should plan to float it. 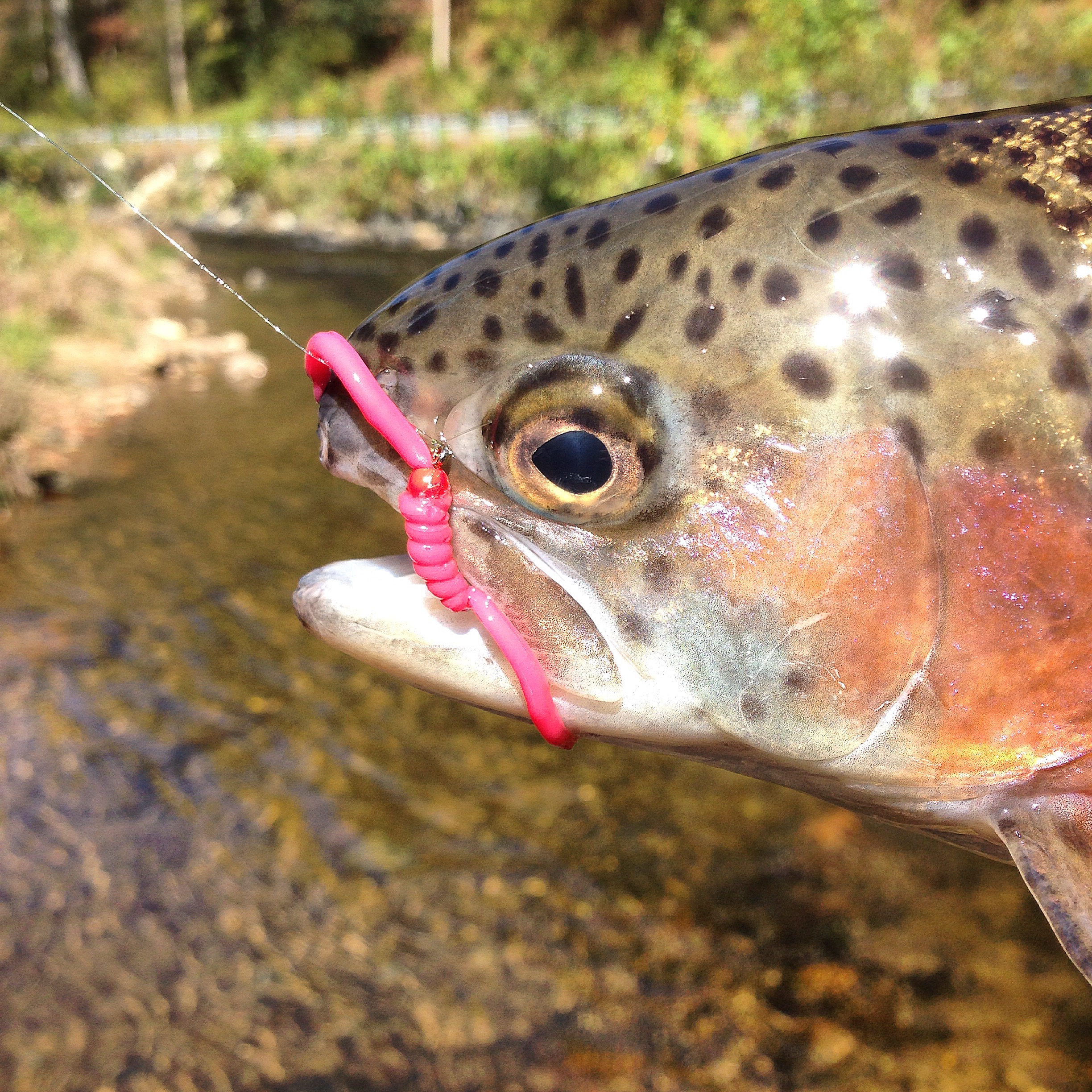 The worm fly has led a strained existence.  On one side of the spectrum exist dry fly purists won’t fish it and look down their noses at it.  In the middle ground are anglers who will fish whatever flies imitate food the trout are currently feeding on at the time.  And on the far side are fly anglers who have had great days fishing worms and can’t seem to start the day without one.  I reside somewhere in the middle.  The reason I fly fish for trout is primarily to solve the puzzle of what are the fish taking now.  If trout are eating worms I will tie one on.  If they are eating eggs I will fish one of those on too, but that is a different story.  I fly fish primarily in the South East for trout and we have lots of rain.  When rain falls the ground becomes saturated and worms crawl to the surface because the soil pores no longer have enough oxygen to sustain them.  Once the worms emerge the unlucky victims close to water are carried away into the stream flow and trout now have a crazy protein rich food source to gorge on.  I have always caught fish on worms during or after rains, but I had never seen a trout eat a natural for obvious reasons (my vision isn’t good enough to see worms under water).  This September I was fly fishing Flat Creek in Wyoming with my father in law.  It is usually dry fly heaven.  The weather was cold and rainy so we couldn’t fish dry flies.  We decided to fish streamers since our dries wouldn’t float.  My last trout of the day was  beautiful 18” cutthroat.  As I was removing my streamer from his mouth he vomited enough worms to fill an 8 ounce cup.  Point proved.  This guy had eaten an entire days worth of food in a few hours. I am really surprised he still wanted to eat my streamer.

Rain is not the only time to fish the worm.  It is the only time trout are seeing worms in the water column, but this summer on the Watauga River we had two months of super low clear water and little to no insect life.  If there is nothing in the water for trout to eat during periods of high metabolic activity I have found they eat random big flies because they are hungry.  This summer on a clear hot day when I saw no bug or fish activity I tied on a squirmy worm out of desperation and my modest expectations were shattered.  Trout both wild and stocked commenced to chew through my worm collection with a vigor.  For a month and a half I experienced a fantastic worm bite.  I believe this happened because trout hadn’t seen them since the spring and in the absence of food they ate my flies with insane optimism.

Any of us whose fly fishing journey have known since our pond days that fish eat worms. I believe you should fish whatever way you want.  I have no agenda, but to help people catch fish.   If you want to fish dries exclusively, no problem.  More fish will eat the worm for me.  If you are interested in fishing any item on the trout’s list of food items, then throw some worms in your box.  They will get eaten!