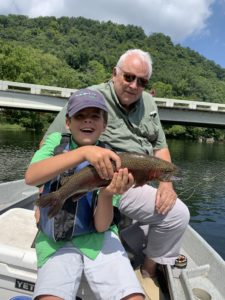 Davidson River Fly Fishing Report
The Davidson has fished ok this week. We’ve been catching fish this week both at the Davidson River Fish Hatchery and down between Avery creek and looking glass. We have also had some luck up Looking Glass Creek. Nymphing and Dry Dropper have been best. We have done some streamer fishing but it has only yielded limited success. Terrestrial Dry flies and Stimulators are still the best searching patterns for the dry dropper and pretty standard nymphs 14-18 have been the best droppers. On the mornings it rains we have pretty good hatches of craneflies, caddis, and some small baetis mayflies. That makes selecting a dropper a moving target but the fish haven’t been super fussy. All the fish we are catching are eating willingly, but you have to search for them. Its kind of weird. When you find one it will eat on the first or second cast often. Then you might go two holes before you see another fish. Then it will eat on the first cast.

Watauga River Fly Fishing Report
The Watauga has been fishing well. All of the water above the Doe river has been productive on low water. The high water fishing wasn’t great last week but is turning on. The first brooder dump has occurred so there are lots of big hatchery rainbows running around the upper end. Midges and baetis still dominate the drift, but were catching quite a few fish on terrestrial dry flies. The lower end of the Watauga is producing nice fish but is getting warm in the afternoon. The striper bite has been really good the last week or two. Lots of meat has been going in the cooler and many trout lives have been saved. Keep up the good fight killing the stripers.